On first weekend of June, sixty swordsmen and swordswomen arrived just outside Bangor, Northern Ireland. Over the Saturday and Sunday the chime and clash of steel on steel was heard as blade met blade. 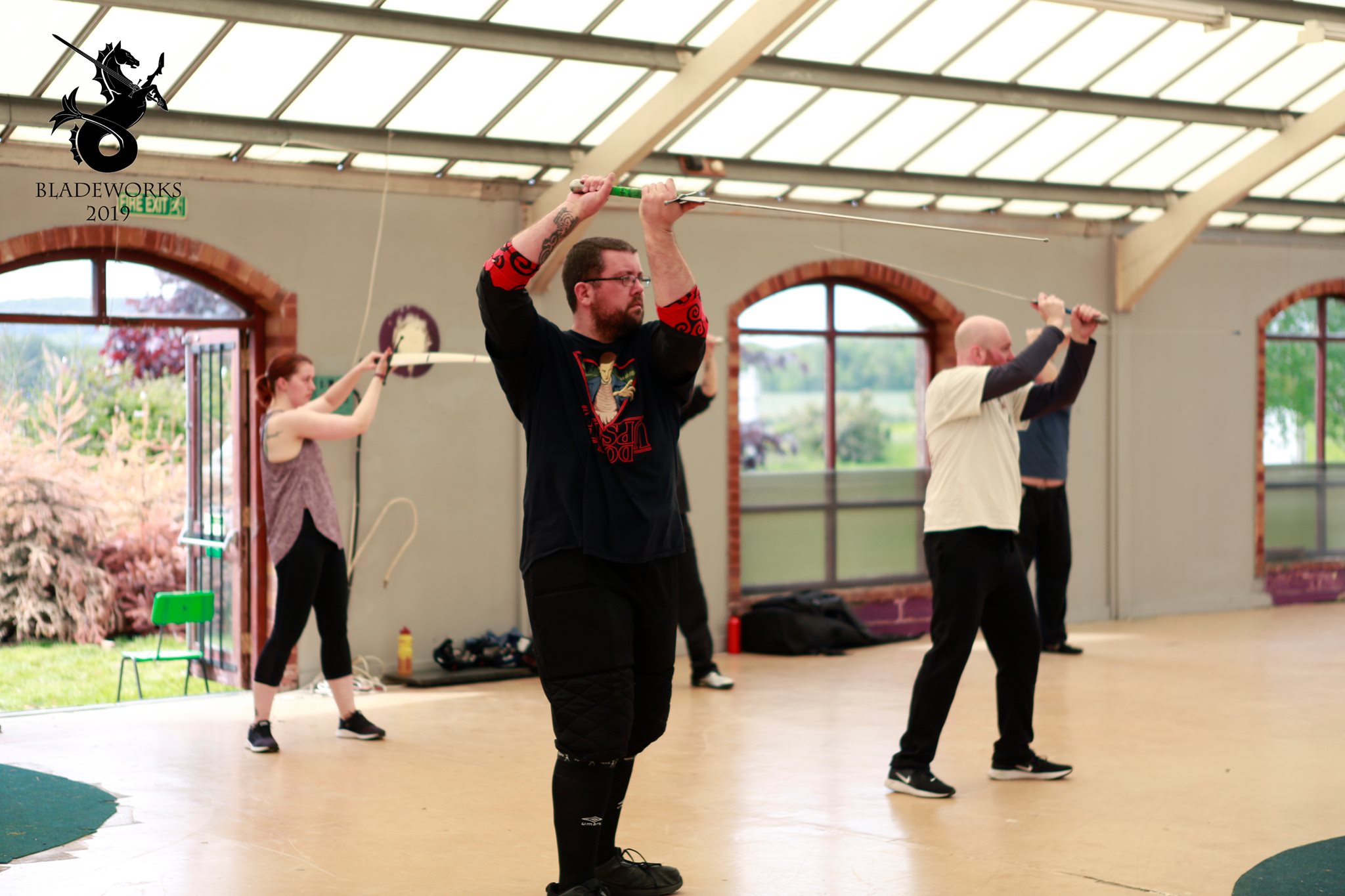 Each year, practitioners of Historical European Martial Arts have a gathering in Northern Ireland for the annual Bladeworks event to hold workshops, tournaments, and training under local and international instructors.  All arts trained at Bladeworks have been revived from surviving historical fighting manuals from the medieval period and onwards, and a variant of modern fencing masks and jackets as protection to allow them to spar with realistic intensity.

Tournaments at Bladeworks are skill-based; you fight against all opponents with no judges or referees, every fencer involved fights every other fencer, one to one. Defeat only means temporary withdrawal, in the Fechtschule system of tournament the fighters are effectively immortal and can return to the ring again and again. At the end of the allotted time for the tournament, each fencer casts a vote for the opponent they felt was the most skilled, chivalrous, or courageous. The fencer with the most votes, who has won the most respect from their peers for their skill and conduct, wins the prize. 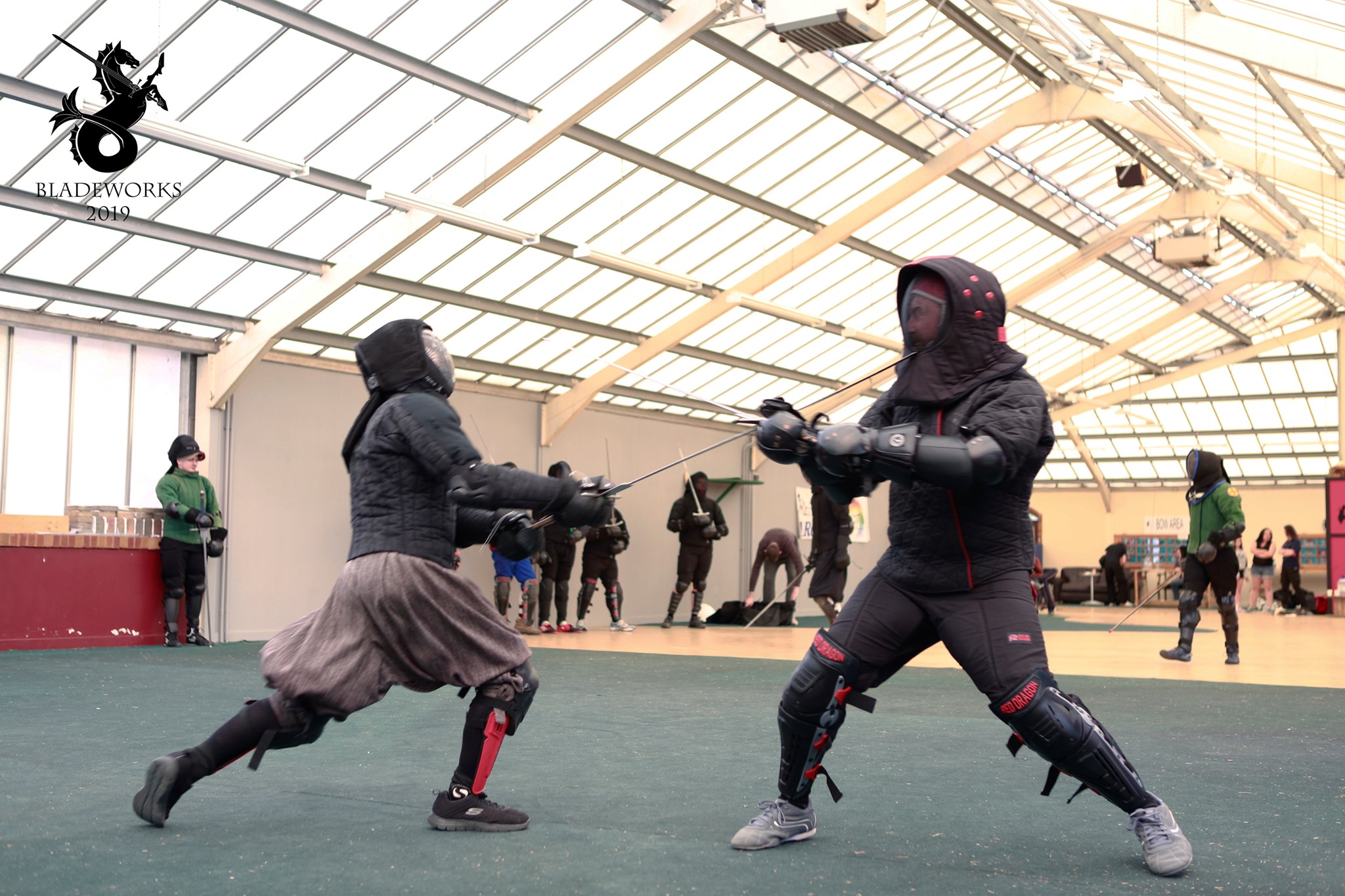 As hard and diligent as the training and sparring is during the day, the confrontations in the evening take a different form – the board games arrive. Fittingly, this year River Horse Games were kind enough to offer a Prize of the Highlander Board Game, which was awarded to the winning fencer in the longsword tournament.

Two of the instructors from the host club, Medieval Combat Group, provided their own copies of the board game and expansion for the evening gaming sessions, and it didn’t take long on the Saturday night for the games to reach capacity. The game’s simple and direct style of play was perfect for Bladeworks and players new to the game were able to pick it up within about two turns. Rivalries developed quickly between the players and there was as much verbal sparring between the players as there had been physical sparring during the day. 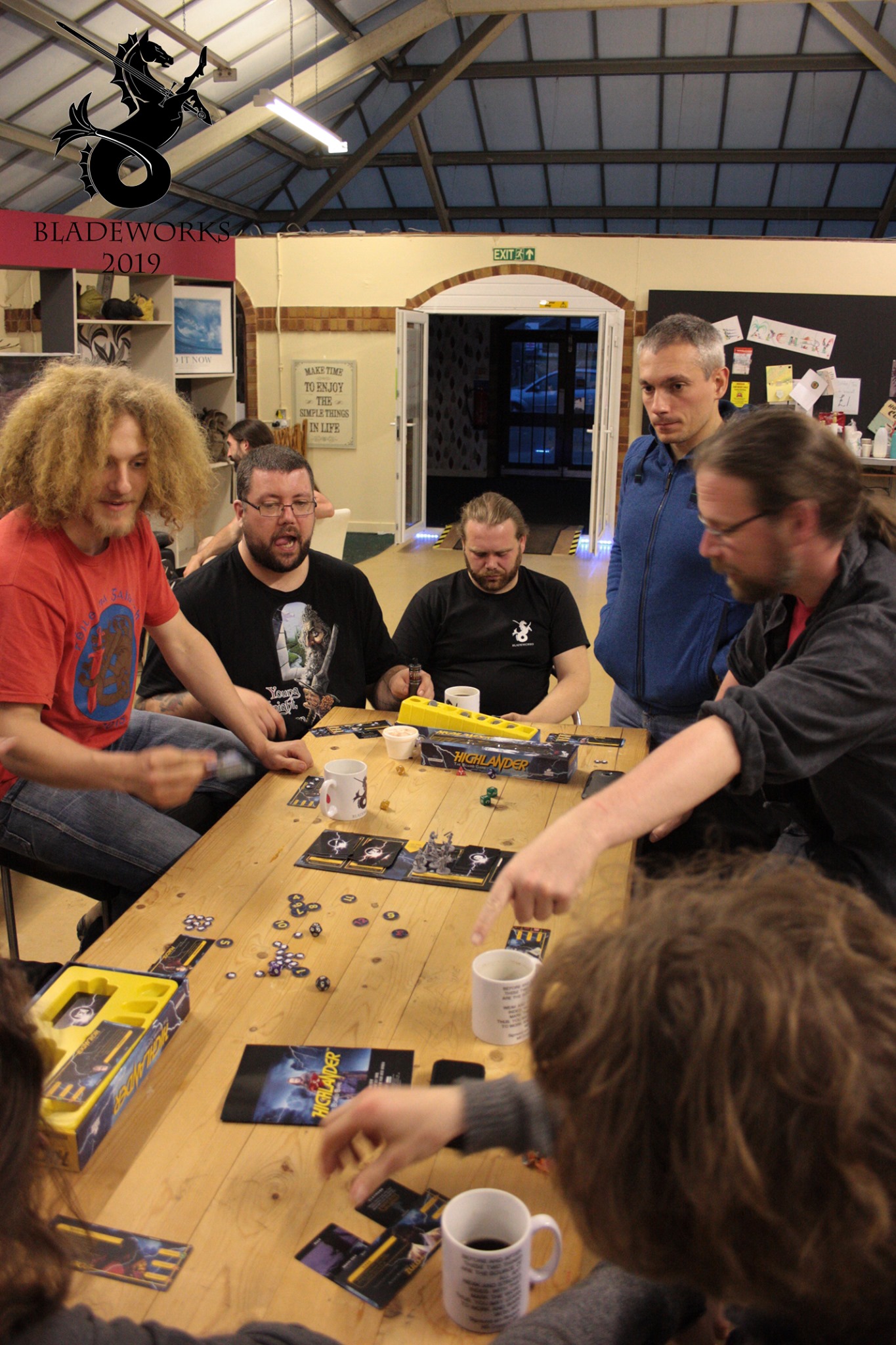 The simple choice of hunting or laying low gave players a fairly simple initial tactical decision, with characters’ play styles evolving during each game with increasing stats, new weapons, or allies. With maximum players almost every turn resulted in a clash in the arena and gamer’s quickly realised the early game advantage of high cunning; which affected their later character choices!

The turn of the Era cards paced the initial stages of the game nicely but the regular arena fights quickly led to beheadings and the evaporation of a substantial portion of the Era deck! The reality of a diminishing amount of time before the Gathering resulted in a rush for players to find better allies and weapons, or diminish another Immortals power.

In no time at all the Gathering was upon us, and the few who remained battled to the last.

In the first game the arena in play restricted the use of Quickening tokens for re-rolls, and the Kurgan seemed set to take the Prize with an incredibly buffed attack power, but fittingly fell to the Highlander’s incarnation as Russel Nash in one of the final fights, Nash going on to claim the Prize himself. 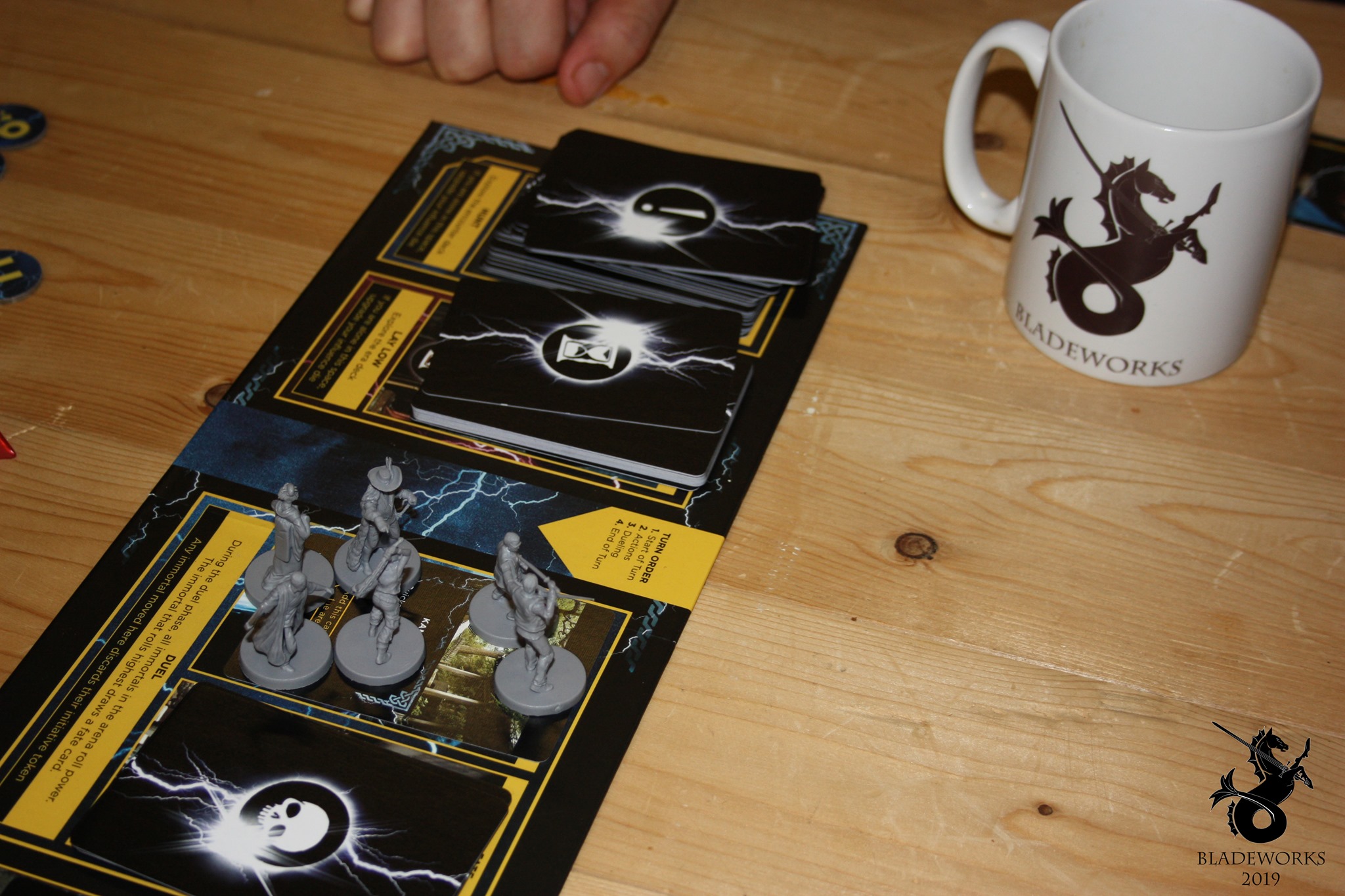 All told the games took around half an hour, even with a group substantially comprised of new players. Allowing beheaded players to re-join the game as one of the remaining unused Immortals until the Gathering starts kept things feeling inclusive without watering down the potential lethality of the fights.

For a martial arts event based around styles of swordplay found throughout history, with trained Medieval longsword and longknife fencers, Renaissance rapier fencers, Victorian sabre and cutlass fencers, and other styles all represented, it’s hard to imagine a board game more in keeping with the tone and theme of the event than Highlander.

Congratulations to Paul Reck of Goat’s Head Historical Fencing for taking the Prize from the Longsword Fechtschule, and the copy of the Highlander Board Game! 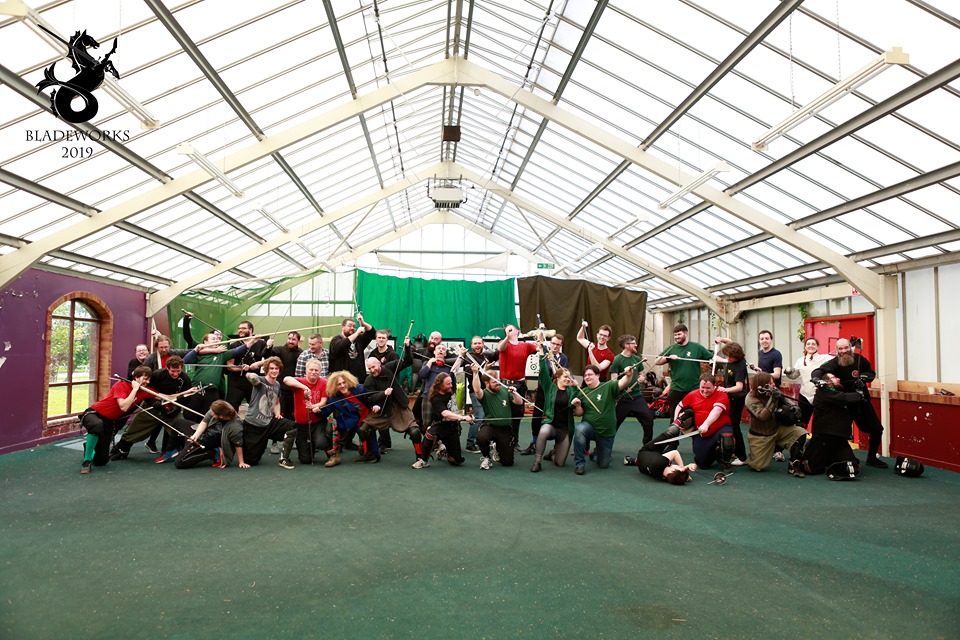