The process of designing the Noli board game was fascinating. The initial design was not too different from the final one in terms of the three phases play is divided into – secret bidding for resources, frantic dice-rowing of the Regata, and fishing season with ‘events’.

What took a lot of development was how several of the details interact, and fine-tuning the game so that it is interesting to the veteran gamer and yet fun for the young person and for the non-gamer to enjoy.

For the bidding, I’ll focus on two points that were very interesting.

The first is that we started from a point where the bidding for each resource had a starting price, which made some resources intrinsically more expensive than others. The debate then was about what the starting price should be (i.e. the relative importance of each resource). That was a very complex, never-ending conversation, as the relative price varied in different parts of the game – early, mid, end-game. Eventually, rather than try to decide those prices, we decided to simply remove the starting price, and simply let demand influence the price. That was far more flexible, and allowed players to do clever tricks when occasionally they try to buy a resource that is not currently in high demand for an incredibly cheap price. Combined with the double-up on winning bids (ie. if you win a bid for a resource, you can spend exactly the same winning bid amount to buy a second copy of that resource), that made for a very entertaining and as far as we know, fairly unique bidding mechanic.

The other part of the bidding that was changed many times was the favour track. It always was about breaking ties, but it had quite a few other mechanics attached to it. For example, there was a time when along the path you could pick up free boats, oarsmen etc, as well as rebuild the city walls, but we stripped that down to the wall-repair mechanic only, for simplicity and flavour. The change with the major impact was that for a while we played it that the faction reaching the castle won the game automatically! That was very powerful, and it meant you could ignore the tower-building elements in favour of concentrating on the political career represented by the favour track. So you had two ways of winning. Once again, flavour had a weight on the decision about that mechanic. It felt against the spirit of the game that after all, like in actual history, it was all about having the tallest tower! So we said that reaching the castle ends the game, which is still powerful, but it’s more subtle, as it requires to plan to end the game on a turn when you have either the highest tower, or at least score a draw for the highest tower, because, remember, the favour track also breaks ties, so you would win the game anyway! That made it a more tricky win to achieve, so more interesting, and still respectful of the ‘I have the tallest tower’ main theme of the game.

Why don’t you give Noli a try and see what you think of these, and the other many elements of the game? 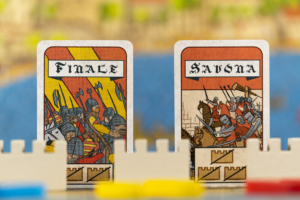 Noli is at its heart a capricious game, designed for families and relying on a luck element to give less tactical players a chance against savvy rivals. There are a two main elements that are up to the winds of fate: Winning the Regatta, and drawing the fishing cards you need. With that in mind, there is definitely one part of the game that requires some strategy and has interesting mind games for you to play – the bidding phase. So how do you master this phase? Keep these tips in mind and you’ll be building towers to the sky in no time!

For any strategy, it is wise to keep an eye on your opponents’ treasury, keeping an eye on how many fish they’ve caught and what sort of buying power that gives them. If your competitors have only a few coins, there’s no point in putting down massive bids.

Each bid can be thought of as a game of Rock, Paper, Scissors. Rock is bidding high, and it beats scissors, which is bidding low. Paper is bidding nothing at all, and while at first this may feel like losing, it can actually be a huge advantage to bid nothing when your opponent bids everything they have. Of course, unlike Rock, Paper, Scissors, you or your opponent may not have enough coins to play rock, and the favour advantage may make scissors less appealing than paper.

Apply pressure when you have the favour advantage

Bidding on the courtier may seem less important when placed next to building ships and towers, but it does serve an important purpose. If you are ahead on the favour track, you can start placing one coin into assets you would like, but don’t want to waste a high bid on. This forces opponents to either place two coins, which is double your bid, or let you have the asset for extremely cheap (and cheap to double up on). Having the favour advantage can help you bleed your opponents dry for very little cost.

Everything is worth what is paid for it

At the start of the game, players are on fairly equal footing, with 7-10 coins each. At the end of the game the economic powerhouses might have 20 coins each turn and a desperate need to grab just one more tower! A sneaky player can see that towers can be extremely cheap at the start of the game, while boats very expensive, then vice-versa as soon as demand changes. Nothing feels better than nabbing a double tower on the first turn, even if it puts a target on your back.

A solid economy can be everything, wealth is relative

Having one boat puts you at a huge disadvantage, and is a problem that needs to be solved as soon as possible, whereas having three puts you in a comfortable position which allows you to apply pressure during the bidding phase. If you have even half the wealth of the top player, they cannot be certain of winning more than one bid, so trying to stay in that danger zone is extremely useful. With that said, if you are the top player, you can be certain of winning one bid, which can mean victory if you are close to the top of the tower. Bidding low when you are wealthy can help preserve that advantage, rather than winning one bid and being back to square zero.